LINING UP: Entries in the Great Race started arriving earlier this week at the Crowne Plaza in Warwick.
(Beacon Communications photos)

MASTERMIND: Jeff Stumb looks on as an antique car is offloaded from a McCollister Auto Transport. McCollister is one of several race sponsors. A transport follows the race to Fargo, ND.
(Beacon Communications photos)

BACK AGAIN: This 1938 Riley built in Great Britain is one of more than 120 cars entered in the race. Owned by a couple from St. Louis, the Riley is a veteran of the race.
(Beacon Communications photos)
Posted Wednesday, June 15, 2022 1:00 am

Today’s high cost of gasoline won’t deter 120 of the world’s finest antique automobiles from revving their engines this Saturday at Rocky Point as they set off on a 9- day, 2,300 mile race to Fargo, North Dakota.

The 10:30 a.m. start of the 2022 Hemmings Motor News Great Race isn’t the only opportunity to view these vintage vehicles from five countries. Competing teams started arriving at the Crowne Plaza earlier this week. The Crowne is not only the rendezvous for the event but where technical inspections of the cars will take place beginning at 7 a.m. Thursday and ending that evening at 6:15. A series of events is planned for the competitors from a rally school and course instructions to a mandatory general meeting.

The City of Warwick and automobile enthusiasts have made sure to extend the red carpet. Dick Shappy is set to hold an open house at his Vintage Auto Sales Wednesday in Providence and is scheduled to host the teams to a social hour and reception that evening at his Warwick Neck home.

Event director Jeff Stumb promises it will be a memorable event with cars lining the lawn overlooking Narragansett Bay. Stumb said Warwick and Mayor Frank Picozzi have graciously welcomed the race and gone to lengths to ensure the start comes off without a hitch. Governor Dan McKee will be lowering the starting flag on Saturday.

“In the 39-year history of the Great Race, the event has made its way east and west and north and south through 46 of the 48 contiguous United States,”  Stumb said in a release. “In 2022, the Great Race will finally be able to add the last two states to the list – Rhode Island and North Dakota.”

Initially race organizers planned to start the race in Providence until they met Mayor Picozzi.  He suggested Rocky Point and after visiting the park the die was cast. Questions then focused on routes to use going to and from the park. Cars will enter from Palmer Avenue. Competitors will be lined up along the waterfront road and walkway leading to the Rocky Point Road entrance to the former amusement park. On leaving Rhode Island the adventure will travel to 19 cities in Rhode Island, Connecticut, New York, Pennsylvania, Ohio, Indiana, Illinois, Wisconsin, Minnesota and North Dakota.

“We are excited to start the 2022 Great Race to Warwick, and in the days leading up to the start the participants will travel all over the Rhode Island,” Stumb said. “We have multiple events planned, including a tour of a private car collection in Providence as well as ‘Newport Day’ on Thursday, June 16. We will be able to enjoy that city and its rich car culture, including the Audrain Automobile Museum and the Newport Car Museum.”

Teams and cars from England, France, Germany, Australia, Canada, and every corner of the United States, will converge with vintage automobiles dating back as far as 1916.

“There are more than 500 people just in our entourage from all around the world,” Stumb said.

The Great Race, which began 39 years ago, is not a speed race, but a time/speed/distance rally. The vehicles, each with a driver and navigator, are given precise instructions each day that detail every move down to the second. They are scored at secret check points along the way and are penalized one second for each second either early or late. As in golf, the lowest score wins.

Cars start – and hopefully finish – one minute apart if all goes according to plan. The biggest part of the challenge other than staying on time and following the instructions is getting an old car to the finish line each day, organizers say.

Each stop on the Great Race is free to the public and spectators will be able to visit with the participants and to look at the cars for several hours. It is common for kids to climb in the cars for a first-hand look.

A 1916 Hudson Pikes Peak Hillclimber, a 1917 American LaFrance and a 1917 Peerless racer are the oldest cars scheduled to be in the 2022 Great Race.

Over the decades, the Great Race has stopped in hundreds of cities big and small, from tiny Austin, Nev., to New York City.

“When the Great Race pulls into a city it becomes an instant festival,” Stumb said. “Last year we had several overnight stops with more than 10,000 spectators on our way to having 250,000 people see the Great Race during the event.”

The event was started in 1983 by Tom McRae and it takes its name from the 1965 movie, The Great Race, which starred Tony Curtis, Jack Lemmon, Natalie Wood and Peter Falk. The movie is a comedy based on the real life 1908 automobile race from New York to Paris. In 2004, Tony Curtis was the guest of the Great Race and rode in his car from the movie, the Leslie Special.

The Great Race gained a huge following from late night showings on ESPN when the network was just starting out in the early 1980s. The first entrant, Curtis Graf of Irving, Texas, is still a participant today. 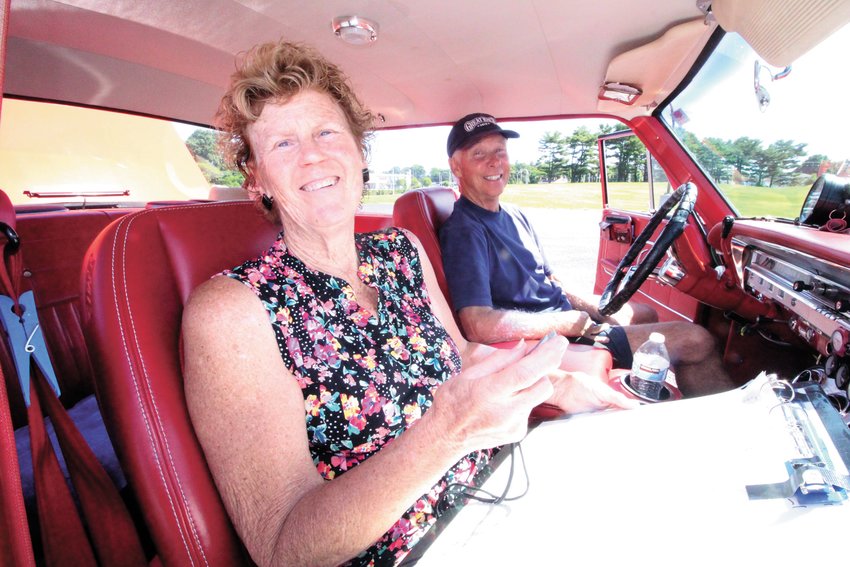 TEAM MANGAN: Marlene Mangan, the navigator, and her husband Tim from Bend, Oregon have done the race nine times. Their son, Bradley and his wife …

Tim and Marlene Mangan from Bend, Oregon were getting ready to enter their 9th Great Race competition Tuesday morning at the Crowne Plaza parking lot. To them, the competition isn’t just about speed. It’s about precision, persistence, and having fun. Tim first competed in the Great Race back in 2013, his son, Bradley Mangan, served as the navigator. They were both bitten by The Great Race bug and haven’t stopped since. His son started driving his own car with his wife Jamie in 2016 competing against his father. Tim’s wife Marlene stepped up to be his navigator. Mangan is driving his father’s 1965 red Ford Fairlane.

“The key is communication,” said Mangan. “She will tell me 35mph for 12 minutes and I’ll repeat it back to her.” In this race being one second off at a checkpoint can mean losing a point.

Each car has a team of two, a driver, and a navigator. The navigator is given a set of instructions each day. The team must follow these instructions exactly to the second to stay on course and hit their checkpoints. There are no road names given, and no use of odometers, maps, or calculators. The navigator is in charge of making sure the team stays on track and calculating the time traveled compared to how fast the car is driving.

The teams use a stopwatch along with the new instructions they are given daily to find the checkpoints. They must meet the checkpoints at the exact time, not a second late or early. If they do that they get an “ace.” The Mangans have more than ten aces stickers on their car.

Tim said, “The secret is to follow the instructions specifically.”

He originally drove a vintage convertible in 2013 but his wife was not so fond of the idea of not having a roof during the journey. Rain or shine the race will go on. Some drivers in open-top vehicles choose to wear swimsuits when rain is expected. Tim and Marlene last year finished in the top 12 percent of racers. During last year’s race, they made one little addition mistake and took a wrong turn but they weren’t going to let that stop them.

“You just need to keep going,” said Tim, and that’s what they did and eventually found themselves back on track.

While they hope to one day finish in the top 10 percent to Tim it’s not all about the numbers but the adventure of it all.

Johnston’s healthcare sector is booming. Although construction is clogging one of the town’s central arteries, the temporary pain may be worth it down the road, according to local …